Champ came to us at 5 months old. So young, but already so badly abused. He hid in the corner for days. When we did manage to gently and slowly coax him out, fear caused him to urinate himself.

We felt with time, he would come out of his shell and play, act and explore as any puppy should……but months went by…….

Eventually this precious soul bonded with Kathy and followed her everywhere. By 10 months old he was literally in the tub taking showers with her and would not let her out of his sight!  When she went to work, he would hide under the bed until she returned. Then something magical happened. He met her granddaughter….Champ responds well with children, He adores them!

Now champ is a handsome and precious 3 years old but even with training, reassurance and all the positive love in the world, he simply does not trust men. Men have hurt him to the point where he can forgive as all dogs do, but can not forget.

Because of his reactive behavior with men, he can not be considered for adoption.

Though he will never have a family of his own, he does have the PMAD family. 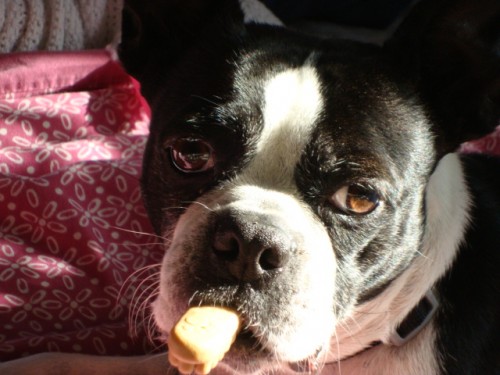